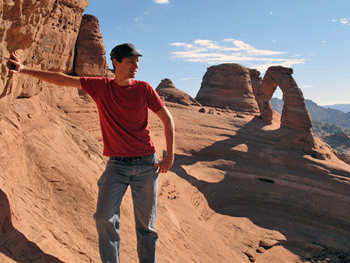 Postdoctoral scholar Kevin Lewis has been selected to join the team of
NASA's latest Mars mission, the Curiosity rover. Having launched
successfully over Thanksgiving weekend from Cape Canaveral, Curiosity
begins a 9 month journey as the largest and most complex rover ever
sent to the red planet. After landing next summer, the rover will
begin a 2-year long exploration of its landing site at Gale crater in
search of past or present habitable environments.

As a participating scientist, Dr. Lewis will conduct experiments and
help with the daily operational duties of the rover on the Martian
surface. His research focus will be to search for evidence of climate
variability preserved in the thick sequence of sedimentary rocks
preserved within Gale crater. The detection of these climate signals
could help in understanding the forces responsible for climate change
on Mars billions of years in the past.

At Princeton, Lewis has been working with Prof. Frederik Simons
investigating the origin of the Martian magnetic field, as well as
Prof. Adam Maloof, investigating the origin of climate cycles recorded
in the rocks of the Green River Formation of the western US. The
tools and methods developed over the course of these research projects
will have direct application to Curiosity's exploration of Gale
crater.

The Curiosity rover team includes scientists from a number of
international universities and institutions. The rover itself
includes a suite instruments designed to do both field geology and
laboratory analyses, to determine the morphology, chemistry and
mineralogy of surface rocks and soils. It will be operated from the
Jet Propulsion Laboratory in Pasadena, California.
Curiosity rover (simulated) in operation on Mars. Photo courtesy of NASA. 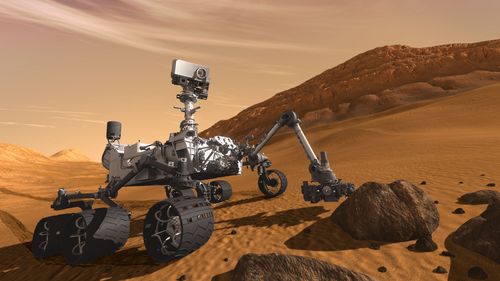