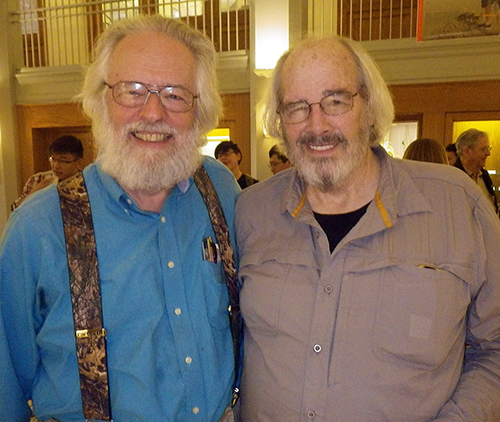 On November 18th, the department was pleased to welcome back paleontologist Jack Horner, who gave a special seminar in Guyot Hall Room 10, entitled Dinosaur Evolutionary Patterns, or Why it was Good to Get Rid of the Princeton Paleontology Collection. He also gave a Princeton Public Lecture entitled Dinosaurs of the Past, the Present, and the Future on Tuesday, November 17th, in McCosh 50.

Jack came to the Department of Geology in the 1970’s to work with Dr. Donald Baird in the Natural History Museum then housed in Guyot Hall.  He left in the early 1980’s for The Museum of the Rockies in Bozeman, Montana where he is currently Curator of Paleontology, as well as Regents Professor of Paleontology at Montana State University.  Jack discovered the first dinosaur egg nests in the Western Hemisphere, the first evidence of dinosaur colonial nesting, the first evidence of parental care among dinosaurs, and the first dinosaur embryos. His discoveries transformed our understanding of dinosaur behavior and physiology and, as a result, Jack was awarded a Doctorate of Science honoris causa from the University of Montana in 1986 and the MacArthur Fellowship in the same year.

During his long career Jack's research has covered a wide range of topics about dinosaurs, including their behavior, physiology, ecology and evolution.  Jack is widely acknowledged to be the inspiration for the main character in the book and film Jurassic Park and has served as the scientific consultant for all the Jurassic Park/Jurassic World films. Jack has written eight books including his most recent “How to Build a Dinosaur: The New Science of Reverse Evolution”, and has just completed his ninth book entitled “The Theory of Dinosaurs”. Having filled The Museum of the Rockies and a 5,000 square foot warehouse with his dinosaur collections, Jack is now “retiring” from Montana State University and moving to the University of Washington, Seattle, to be a Research Associate at the Burke Museum of Natural History and Culture and work on a new exhibit based on his Hell Creek Formation collections. Jack has also received a three year Presidential Fellow at Chapman University in Orange, California where he will teach one class a year on anything he wants.

Here is a bit of departmental history concerning dinosaurs: